Good day. It has been six months since I last wrote, and three years since my TBI. Three years ago I woke up in the hospital, and when I say “woke up” I mean “regained my senses.” During the last three years I have continued to regain my senses, it has been a bumpy ride and there is no reason to believe it will ever end, the most difficult part of “recovery” is acknowledging it can never be complete.

As I look over my records, I have written fifty one articles for this blog during those three years, many of which I have no memory of writing, which is a large part of why I stopped. I could not remember what I had already written, and even at the exceptionally slow rate I was writing I felt I was repeating myself. I intend to thoughtfully chronicle my recovery process, and maybe turn it into a book. That sells. My last book didn’t sell very well, but its purpose was not to make money.

I can look back clearly enough to see I have had ups and downs during recovery, I have been better than I am now and have been much worse. It has not been a linear journey. There were times I was almost my “old self,” I know I have cooked meals for gatherings  and can see the words I have written, but I have been unable to do either for at least six months, I can’t recall the last time I prepared a meal.

One exceptionally positive thing I learned in the last round of therapy is that I am retaining information, my difficulty is retrieving it, finding where it is stored in my brain. One test was a panel of twenty items, drawn simply in black and white. After looking at the page of items for sixty seconds, I was asked to remember them. I remembered seventeen. We went on to other tests and then thirty minutes later the therapist asked me which items I remembered, and I was able to name sixteen of them. But it wasn’t the first seventeen minus one, I forgot some and remembered others. Ten minutes later she presented me with a series of cards, each containing an item, but this time there were forty, and my goal was to identify which ones were on the original page. I was able to identify all twenty, with no errors. The information was all in there, I was just unable to identify it all at once.

Among the things I have written off forever are the languages in which I was fluent, but every now and then a phrase slips out in one of them, usually unexpectedly. I still have fun trying to decipher words written in Cyrillic, but I cannot understand a word spoken by my Russian friends. They still presented me with a beautiful ushanka, for which I found a proper pin. 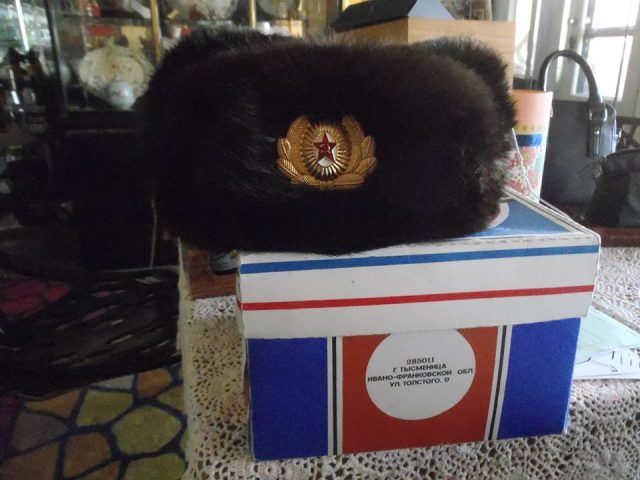 They did refer to it as a “Soviet” hat

A great deal has happened in the last three years, I have been observing but rarely commenting. The national election of 2016, which I had tried to avoid by emigrating to Belgium, was all I had expected it to be. The situation that foiled my “escape” from America has found my forgiveness. Folks are still running about spreading their version of hate and calling it love. I’ve been to a fair number of concerts, and can remember most of them without prompting; and I traveled a bit, visiting both parents with Sam, who had never seen Texas and very little of California before. The problem with my inner ear has been corrected, however, in return I lost a bit cognitively. I am no longer the smartest kid in the room, and I no longer need to be. Some strengths never faded, my sense of direction has remained, at least according to Sam, superior. My technical abilities remained intact, I have driven to a friend’s home over an hour away to repair her copier, and have done some small things in the local community. I have retained the ability to see through the fog of misdirection, which may or may not be a blessing.

I was exposed to so much kindness after my injury that I feel natural helping others out now. I gave an acoustic guitar to a young man in a rehabilitation facility who is suffering a TBI much more severe than mine, and just the other day someone in town asked on the community page if anyone knew how to assemble IKEA, and I volunteered, repairing the drawers in a dresser.

Today I look at a new year, and try not to laugh about the attention paid to a specific date. Every day is a new beginning, every day we are new people, so there is no reason to mourn the person I was before 1 January 2016. My ability to not worry about things I cannot change has been a benefit as I recognize how few things I can change today. It will be little things, creating ripples which hopefully are strengthened  by other ripples of the same frequency.

No promises on how often I’ll be writing, it would be lovely to once again write every day, perhaps that will happen some day. Three years ago I woke up as an old man, I have since been certified as disabled, but I feel neither old nor disabled today.

2 comments on “I am here in the new year”